Sepp Blatter is up for re election next year as chief corruptor of football (ie FIFA president). Lets hope he pays £15 million for his elecction campaign and only gets one vote maybe losing to someone from Qatar

You need to ingest about 4.5 pounds (just over 2kg) of green potatoes before you will feel the effects of the toxins in the potato.

Incidently I think I established today that you really do learn something new every day!

Along with the other things I learnt this year I did learn that robins see magnetic fields using their right eye, so a robin blind in the right eye is not so hot on its navigation skills. Cannot remember which day I learnt that odd fact though…

The Bill is no longer recorded (and had its last episode showed this August). Never watched it so there is no reason why I should have known this before.

Florence Nightingale’s rose diagrams showed by length of radius that most deaths were preventable during the Crimean War (not by area as I had assumed).

There were more than one species of tyrannosaurus (I assumed rex was the only one up until today!)

A costermonger sells fruit and veg.

The story of King Canute first appeared 100 years after his reign and is probably not true.

England last retained the ashes in 1986-1987, and now Australia have scored a record low of 98 they may do so again this year.

Onychophagia is the technical name for nail biting.

As medicine advances the percentage of HIV carriers in a population tends to stabalise, so a reduction in this percentage could be a sign of poor health provision.

Dirk Gently’s Holistic Detective Agency was based partly from ideas in Shada the unscreened episode of Dr Who.

White sandy beaches are actually made from the droppings of parrot fish.

Great Britain is the third most populated island in the world (and the 9th largest).

Horses communicate with their ears, and white horses are born black.

Flu symptoms tend to appear more rapidly than colds (if I had known this the previous Wednesday when my symptoms appeared between 6.30 and 7 I may have consulted a Doctor sooner). I learnt today that I definately had flu.

Brick cheese (which I was told does not exist when at school) is from the USA (Winconsin).

The first christmas card was designed in 1853

Weston-Super-Mare pier has a go kart track in it

A sloth is faster than a giant tortoise

African Pangolins mainly give birth to one offspring at a time whereas the Asian ones are more likely to go for twins or triplets.

The collective noun for hamsters is a horde.

The real Maria Von Trapp made a fleeting appearance in The Sound of Music.

Swindon Supermarine made this years FA cup 1st round, I can remember being entertained by a bad tempered game between them and Taunton Town a few years ago…

The Hungarian Algorithm was actually dvised in america based on the previous work of 2 Hungarian Mathematicians.

140g of sugar puffs will give you 100% of the daily recommended amount of vitamin B1.

I learnt how to make fish head curry.

October is the least lucky month to be born.

In general monkeys cannot swing in trees, apes do. Monkeys run along the branches.

There used to be a football team called Blackburn Olympic, who have won an FA Cup

Today I learnt that the place where some of my dad’s weirder Singapore photos were taken still exists under the name Haw Par Villa rather than Tiger Balm Gardens.

I learnt how to make chilli jam without pectin.

Cats can let out a claw at a time, although I probably would have thought this I witnessed it.

GIMP can be used to create GIF animations after downloading an addin.

I found an even more general proof of the inability of hexagons to create a ball like polyhedron without the help of 12 pentagons.

Trombone is french for paper clip.

Syphilis was known as the f4ench disease in Germany and Poland, the Italian disease in French. basically named after the nation whose travelloers spread it to a country.

Kori Bustard and the Great Bustard both are about equal in weight and are the worlds heaviest flying birds.

I learnt how to make and use custom brushes in GIMP, wish I had learnt earlier!

Camel spiders (solifugae) are not spiders but are 10 legged arachnids.

The slowest speed of light recorded is 40mph through -272 C sodium.

I learnt how to tell a hygenic hawker stall from a more dodgy one.

An open comedo is the technical name for a blackhead.

The proper name for The Gherkin in London is the RE Swiss building. Also Emile Heskey has the middle name Ivanhoe.

I learnt today that I could draw caricatures.

There is no name for a baby snail, but a baby turkey is a poult.

The final of the pro 40 competition this year will be a day night match.

A new bar has opened in Toy Town, the Cosy Club. I had no idea one was opening there, it seemed to appear suddenly.

Cow corner in cricket is named as it is unlikely the ball will be hit there, so cows can safely graze.

Asps do not live in Egypt so Cleopatra was more likely killed by an Egyptian cobra.

Most exciting news though is that there is a serious paper published claiming it has proof that P!=NP, which if verified will net Vinay Doelalijar $1000000. Incidently I love the fact that he has annoucned that he has maybe solved one of the 6 most important unsolved mathematics problems under the heading “Basic Research”. I hope he is right as I think life is easier if P≠NP unless you are a travelling salesperson.

Whilst I expect someone will find a flaw I also think that it may well be a serious stepping stone to a final proof.

A pedifile is as the name would suggest a file for use on the foot. However in an australian accent it is almost indistinguishable from the word peadophile.

Swiss speeding fines are linked to earnings, this has meant the world record speeding fine of £650000 is a swiss one.

Terry Butcher was born in Singapore… 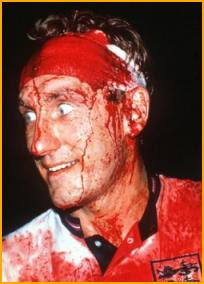 In cricket if a ball hits a fielders cap it is only 5 runs if the fielder has deliberately discarded it.

Today I learnt that I had been ignorant for the last 30 years about the colour of the roses that represent Yorksire and Lancashire (or The House of York and The House of Lancaster). I knew one was red and one was white but I had always pictured York as being the red rose. Very ignorant but in my defence I am a southerner. From this dat onwards I will know that York is white, Lancs are red. As a further note hopefully Somerset will beat the red rose of Lancashire tomorrow…

I Write Like by Mémoires, Mac journal software. Analyze your writing!